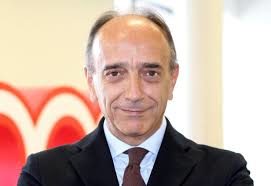 Luca Bernareggi was born in Monza in 1963. His training is within the cooperative movement where he joined Coop Lombardia in 1984 and, after various experiences in the political, associative and institutional world, in 2000 he joined Legacoop Lombardia in the sector of Production and Work Cooperatives, becoming its President in 2001. In 2006 he was elected President of Legacoop Lombardia for three consecutive terms and with this qualification he entered the Legacoop Management and National Presidency, of which he was vice-president from 2015 to 2019. Since 2011 he has been a member of the National Executive of Aci (Alliance of Italian Cooperatives) and since 2015 he has been a member of the National Presidency of the same Alliance. On 28 March 2019, in Genoa, the 4th assembly of the National Association of Consumer Cooperatives-Coop elected him President.

He has held and still holds various positions in the cooperative movement, including Vice President of Cooperare spa, Vice President of Coopfond spa, Genera spa Councillor, President of the Regional Council Unipol Lombardia, Councillor of Cooperare con Libera Terra, the association that brings together more than 70 members including cooperative enterprises, associations and some institutions and is responsible for supporting cooperatives engaged in the social reuse of assets confiscated from organized crime. It is a member of the Advisory Steering Committee of ANBSC.